It’s not uncommon to find Bobcat Company employees who have a family connection to the company dating back two or three generations. But only a handful can claim a direct connection to the founders. Meet three descendants of the Melroe and Keller families.

It Started with E.G.

In 1947 E.G. Melroe founded the Melroe Manufacturing Company in Gwinner, North Dakota. After E.G.’s death in 1955, he left the company to his four sons: Les, Cliff, Roger and Irv — and their brother-in-law, Gene Dahl. In the summer of 1958, the Melroe brothers were introduced to the Keller brothers of Rothsay, Minnesota, and soon they joined forces. The result was a machine that became a worldwide icon: the self-propelled loader. Read the back-story here. Fast forward to 1989. Like many Gwinner-area high school graduates, Mike Melroe got his foot in the Bobcat factory door as a vacation replacement (VR). In 1994 he scored an internship with the Bobcat Product Management group in West Fargo, North Dakota, where he washed, transported and operated the Bobcat equipment used for sales training, marketing videos and photography. Mike then joined Bobcat Company full time in 1997 as a member of the Product Information and Training team.

Today the 45-year-old is director of Key Accounts and Government Accounts, managing a team of internal sales representatives who call on government agencies and large- volume contractors and corporate businesses.

Mike says he’s proud to contribute to the success story his great-grandfather started some 70 years ago. “It’s important to remember your roots — where you came from,” he says.

It’s fitting that Mike works in sales. After Bobcat loaders joined the Melroe lineup, Mike’s grandfather, Irv, was responsible for sustaining the ag side of the business — the plows, harrows and windrow pickups sold in the Midwest. In 1969 Irv and his brothers sold their interest to Clark Equipment Company. The Clark assets were sold to Ingersoll Rand in 1995, which sold the business to Doosan in 2007.

Nearly 50 years after the sale, people still recognize the Melroe family name. Mike says it comes up regularly in his travels. “When I am at trade shows, I may be asked two to three times a day if I’m related to the founders. I’m very proud of the Melroe name.” Lucas Melroe grew up in Gwinner and works as a manufacturing engineer focused on production of Bobcat excavators and Toolcat utility work machines. His great-grandfather, Sig, was a brother of founder E.G. Melroe.

Graduating from Gwinner High School in 2010, Lucas — like Mike Melroe — joined the company as a summer vacation replacement worker. He repeated that summer assignment in 2011, followed by an eight-month manufacturing engineering internship in 2013. Lucas joined Bobcat Company full time in 2015 after finishing his degree in agricultural engineering from North Dakota State University.

As one of just two Melroe family members in the company, he’s proud to represent the name. “My grandpa’s cousins were the Melroe boys,” Lucas says. “It’s a pretty neat story, one I grew up hearing from my uncle, Sylvan. I am proud to be a Melroe.”

Lucas also still helps out on the family farm southwest of Gwinner that was once operated by his great-grandfather Sig and E.G. Melroe. Climbing a different family tree, Shawn Enge is the grandson of Cyril Keller, who with his brother, Louis, invented the loader we know today as the Bobcat® skid-steer loader.

Shawn Enge says he “grew up eating and breathing Bobcat.” His parents worked for the company and lived in the shadow of the Gwinner water tower. Shawn’s mother, Linda, is the second of Cy Keller’s daughters, and his father, Keith, spent 27 years on the Bobcat assembly line, retiring in 1999.

Shawn himself joined the company in 1999, working as a forklift operator and later as an assembler. Today he assembles the Toolcat™ utility work machine, an offshoot of the machine invented by the Keller brothers.

“I am very proud of the product that my grandpa and his brother invented,” Shawn says. In 1957 Cy and Louis Keller designed and built a small three-wheeled loader for a turkey farmer. In 1958, after building a half-dozen more loaders, they met the Melroe brothers.

“Grandpa always told us, ‘You have to work hard to accomplish anything,’” Shawn says. That’s exactly what they did over the next few years. The Kellers moved to Gwinner from Rothsay, Minnesota. As Melroe employees, they produced the first M60 “Melroe self-propelled loader” in late 1958. A redesigned model, M200, followed in 1959, and a year later came the first true four-wheel-drive skid-steer loader, the M400. The first M440 “Bobcat” branded loader came out in 1962.

Bobcat Company, now known worldwide, celebrated the production of its one millionth Bobcat loader in 2014. “I’m very proud of my connection to that story,” Shawn says. 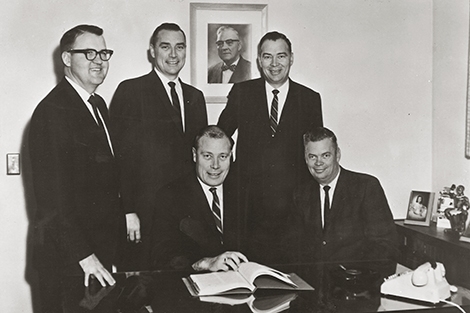 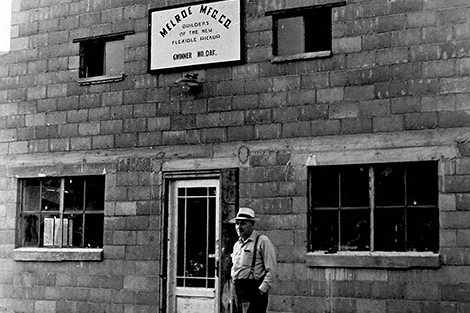 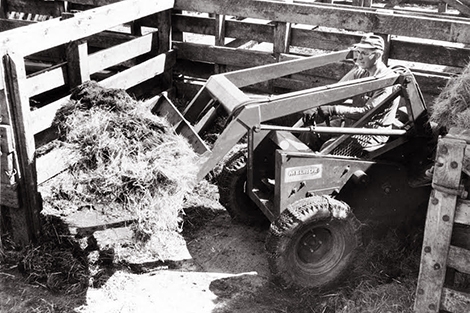